Now the tables have turned maybe things were not as they seemed we just heard that Ariana  Grande broke up with Pete Davidson so when she tried to come to his house after the suicidal  message he avoided her so maybe he doesn’t want to get back with her at all they were supposed to get married.

Pete has not been trying to communicate a  source saids he  is definitely refused to see Ariana Grande giving her the cold shoulder, I  mean I know she had to ..she did have to grieve for her ex man Mac Miller which there is nothing wrong with her taking some time to grieve for someone she cared about

Breaking up with Pete publicly after a ring was kinda cold , and then running back to him  acting as if she is a friend is kinda corny it was not cool to say the least. 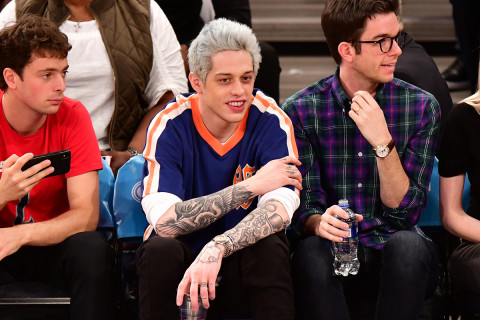 We don’t blame him once someone lets go of a  person it’s pretty much over for Ariana she needs not to waste her time he doesn’t want to talk to her because she played him for a fool thinking she was going to marry him we aren’t clowning this is just what people think who does this  chick think she is maybe it would have been more genuine if she did it privately …right!

Ariana Grande visit to MSNBC studios did not work out the way she wanted he made it clear he did not want to see her and turned her away.

Strange thing .. she said to a fan she did not have Petes phone number did he change his number too wtf dude is cold with it but that what happens when you break up with someone when you about to get married  c’mon girl he doesn’t want to be around you either way now Pete is chilling with people who have been his friends hoping to get him back to his self we hope things work out.

If you or someone you know needs help, please call the National Suicide Prevention Lifeline at 1-800-273-TALK (8255).

Cardi B Goes Off On Dominican Reporter Spazzes Out on Camera
July 20, 2019

Cardi B Goes Off On Dominican Reporter Spazzes Out on Camera

How We Do It

Johnny Depps Movie May Never See the Light of Day

Everything you wanted to know about tattoo in 10 words
November 10, 2016

Everything you wanted to know about tattoo in 10 words

Chris Brown Arrested in Paris on Suspicion of Rape (Scandal)

Pete Davidson Troubling Post “I Really Don’t Want to Be On this Earth Anymore”
December 15, 2018

90 Day Fiance Happily Ever After Review

Horizon Airlines Employee who Died Tragically After Stealing a Plane

Wendy’s Williams Staff Call for Replacement of “Wendy” After Nick Cannon has Made the Show Fun!
March 2, 2019

Cardi B. Threatens to SUE Un -wine -with- Tasha -K on IG

Why Your Music Promotion Sucks
August 5, 2018

Why Your Music Promotion Sucks

Queen Supreme Court was a Hit!!

Aretha Franklin’s Funeral The Queen of Soul has been Laid to Rest
September 2, 2018

KANYE WEST SLAVERY IS A CHOICE???