If your a fan of Preachers of LA you may want to get your women cave or man cave ready because Deitrick Had don has now announced he wants the famous orator Bishop TD Jake’s to join the reboot of the reality TV show that allows us to take a look into the life of TD Jake’s life along with other castmates.

“I’ve been at every network the last couple of weeks and they are trying to reboot Preachers, so fingers crossed …but there is nothing solidified right now,” he explained.

The Beautiful soul movie was made by Deitrick Haddon and American Gospel singer he also was an actor and performer in the movie it is a great movie to watch he also has some other movies in the works as well like TD Jake’s, Haddon has had multiple areas in the faith-based TV he has been able also to reach outside of the church and create music that resonates with the teens and young adults in the church.

Just last month Nick Cannon sat down with the talented gospel singer and during the conversation he explained his views on many topics including the church in relation to preachers who are there to make money and not for the service of God. The main issue with asking Jake’s to come on the show is that he did make some not so nice comments about the Reality TV Show which also starred other preachers Pastor Wayne Chaney, Bishop Noel Jones, Bishop Clarence Clarendon, and Pastor Ron Gibson ran for 2 seasons on Oxygen. 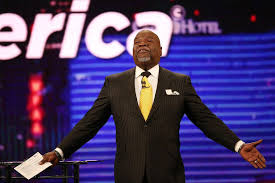 “Now I know you’ve been watching that junk on TV and I want to tell you right now, not one dime of what you’re sowing right now will buy my suit. I want you to know my car is paid for, I want you to know I got my house on my own. I have sold enough books and produced enough movies I don’t need your offering to pay for this little slimy suit. I am not from L.A., I’m from Dallas.”

I personally do believe that Haddon is a trailblazer he is not as uptight about sharing his personal life with his flock so more power to the man who has nothing to hide.

Haddon life TD has created movies and has his own singing career and him producers his own music I don’t see why he would be mad at the other preachers who do the same to acquire their own incomes outside of the church.

Meghan Markle’s Dads Speaks against The Royals on Live TV